There is a concept in psychology called the Dunning-Kruger Effect, which is a hypothetical cognitive bias stating that people with low ability at a task overestimate their ability.

We are all guilty of this cognitive bias at some point, but recognizing it is the first step to understanding yourself and the world around you, allowing you to overcome this bias. 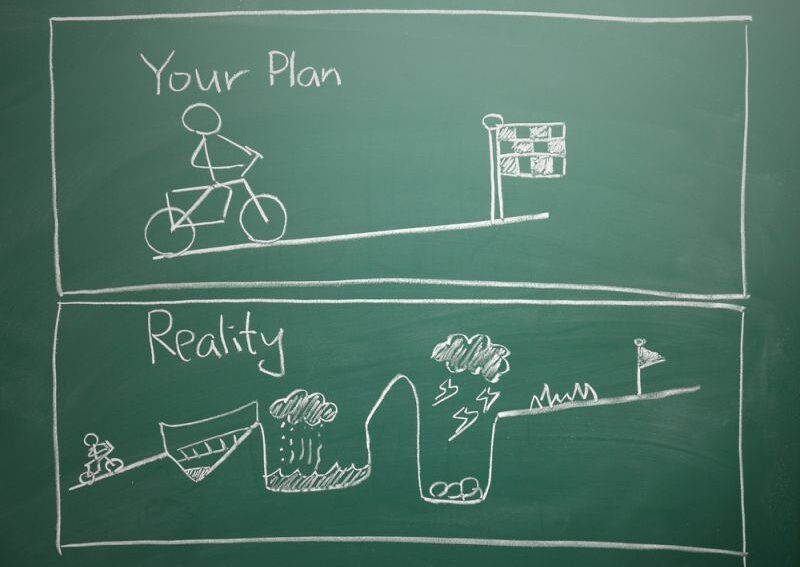 This is a guest post by Craig Rettew of Zepto Industries who is an electrical engineer bringing his own product to market.

I have a tattoo of a circuit design that was part of a product I brought to market. I got it because it reminds me of everything it took to be able to get a hardware product to market and it’s something I’m proud to have as a permanent reminder.

Although I am an electrical engineer and “nerd-out” on product design, I also read a lot about psychology and philosophy.

I became very interested in human behavior which pairs nicely with product development since most of the time, a human will be interacting with your product at the end of the day (sorry robots, no gadgets for you…yet).

It also helps to understand people when you’re working on other people’s projects or working with a team of people. Since I operate an engineering services company it’s important to understand the people I’m working with and to help them set realistic expectations.

There is a concept in psychology called the Dunning-Kruger Effect, named after the two psychologists who did the study. It is a hypothetical cognitive bias stating that people with low ability at a task overestimate their ability.

We are all guilty of this cognitive bias at some point, but recognizing it is the first step to understanding yourself and the world around you, allowing you to overcome this bias. 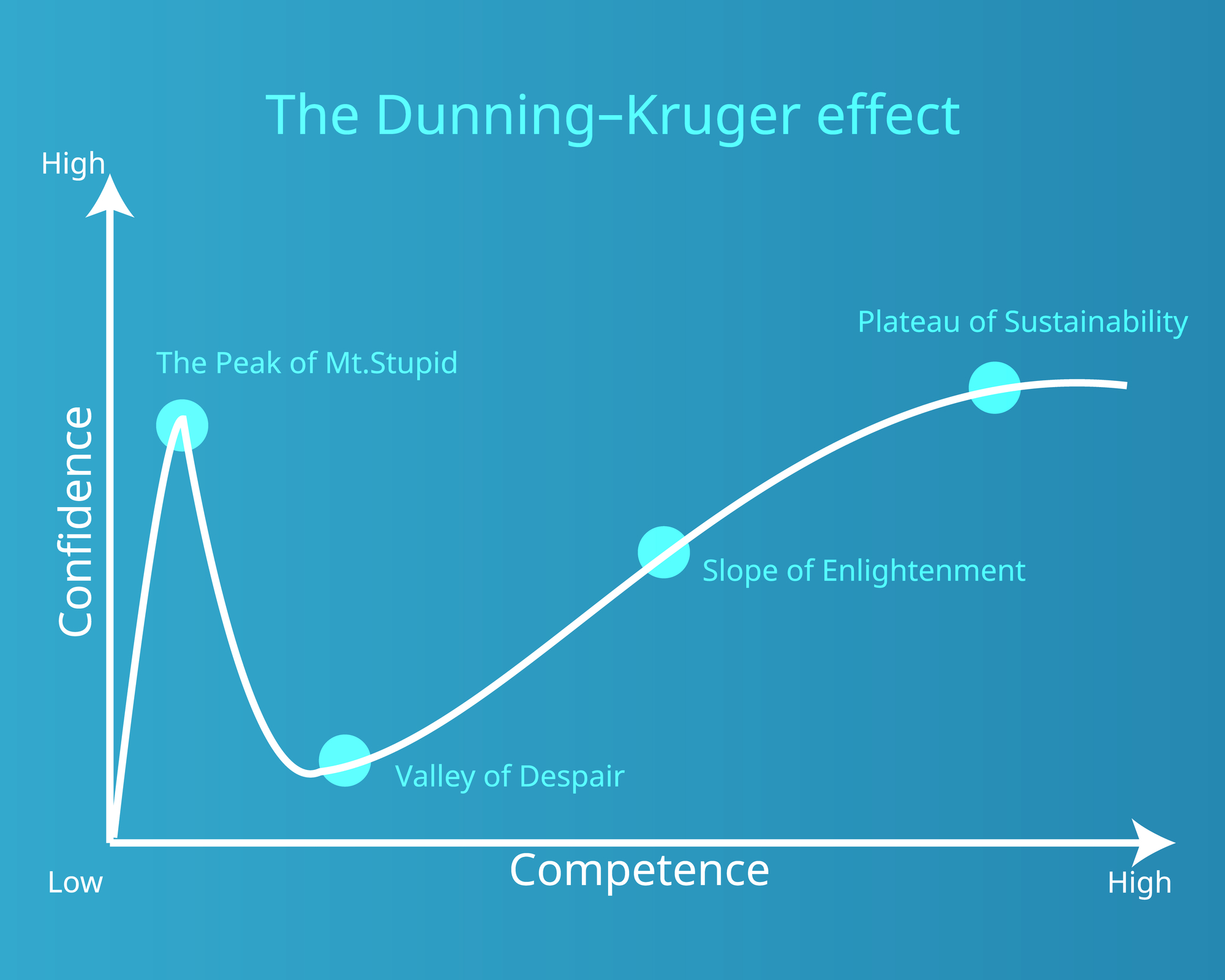 Even with my years of experience as an electrical engineer, the first time I started developing my own product, with the intention of mass producing it, my excitement allowed me to summit “Mount Stupid.”

Then, I was on my way to the “Valley of Despair” when I realized that my prototype using off-the-shelf electronics and “spaghetti” code wasn’t close to being ready to mass produce.

There is tons and tons of value in producing a prototype but it’s a 90% solution, the remaining 10% is the most difficult part.

This is when all the details get worked out in order to produce something that can be repeated thousands or millions of times. If a picture is worth 1,000 words, then a prototype is worth 1,000 pictures.

There is a certain grittiness you have to possess in order to solve the problems to climb out of the “Valley of Despair.”

Solving problems is the reason I became an engineer in the first place, so figuring out what comes next is something I enjoyed. The greatest things in life are just outside of your comfort zone. Do hard things and you’ll be rewarded.

A lot of the time, it’s difficult to know where your true skill level would fall on the competency curve. But you need to have enough self-awareness to hire and trust the “experts.”

Luckily, we live in a time where if you want to learn something, there are several avenues for learning anything you want, sometimes for free. You could even learn enough to know that there is a mountain of knowledge you don’t know.

Resources like Predictable Designs provide invaluable articles about product development and what to expect. I learned that I needed to hire the experts that were much further along the Dunning-Kruger curve than I was in regards to bringing a product to market.

This included an industrial designer to make the product aesthetically pleasing, a mechanical engineer to design the plastic enclosures for manufacturability, and a firmware engineer to refine the code to be robust enough to release to the wild.

Experts are just people who have put in the time practicing a certain skill to know that there is always more to know.

When developing a product there are several micro decisions that need to be made but one of the most important is getting sales.

If you find that you’re endlessly perfecting your product without lining up customers, then you know it’s time to off-load that work and focus on sales if you truly want to have a chance at a successful product.

Sales solves a lot of problems and needs to be a top priority whether you do it yourself or outsource it. Be mindful of the time spent on development.

My second tattoo is going to be a lesson from the mixed martial arts pioneer and multi-title champion Frank Shamrock. He has a system he calls plus, minus, and equal.

The idea he taught each of his fighters was to have someone better that they can learn from (plus), someone lesser who they can teach (minus), and someone equal that they can challenge themselves against (equal).

This is a fantastic lesson that I like to carry through my life and especially when developing a new product. You’re never done being a student and there is so much to learn if you’re willing to put in the time.

The Hardware Academy community is a perfect example of this philosophy. Experts support other experts, they teach others asking product development questions, and learn new approaches from areas outside of their expertise.

Ryan Holiday writes in his book, Ego is the Enemy, about staying grounded:

“One might say that the ability to evaluate one’s own ability is the most important skill of all. Without it, improvement is impossible. And certainly, ego makes it difficult every step of the way. It is certainly more pleasurable to focus on our talents and strengths, but where does that get us? Arrogance and self-absorption inhibit growth. So does fantasy and vision.”

Product development is not only a lesson in technical design but also the human-element. Ideas are great, you should certainly try to constantly think of ideas, but the execution is key.

The old saying “ignorance is bliss” can help you get started and build momentum to launch a successful product. Just know that there are obstacles that you may have not even thought of when you had your “plan” put in place. 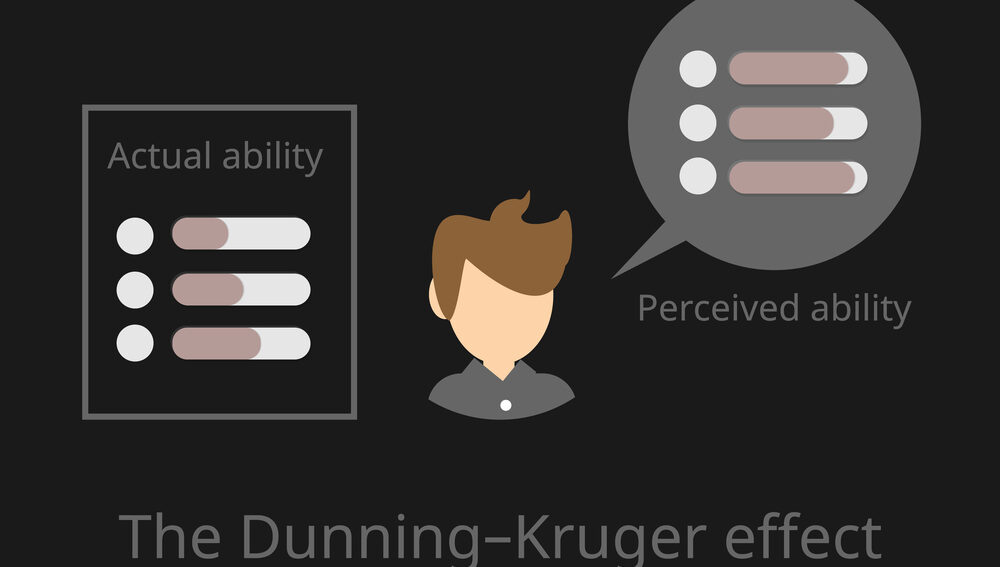 By definition, it’s hard to know if you’re suffering from the Dunning-Kruger Effect, since this cognitive bias affects us all. Be open to learning, get feedback on your assumptions, and always question what you know.

Self-awareness becomes imperative when pursuing difficult tasks, and product development is no exception. If you don’t know where to start, or you’re stuck, you’re in luck.

The resources for overcoming these challenges already exist. You just have to be cognitive enough to seek help, and you’ll be well on your way to making great things!