Home Automation with an Arduino: A Basic Tutorial

In this tutorial I’ll show you how to implement a simple DIY home automation setup using an Arduino microcontroller development kit. You will learn how to turn any electrical appliance into a smart home device, and how to control it from your smartphone. 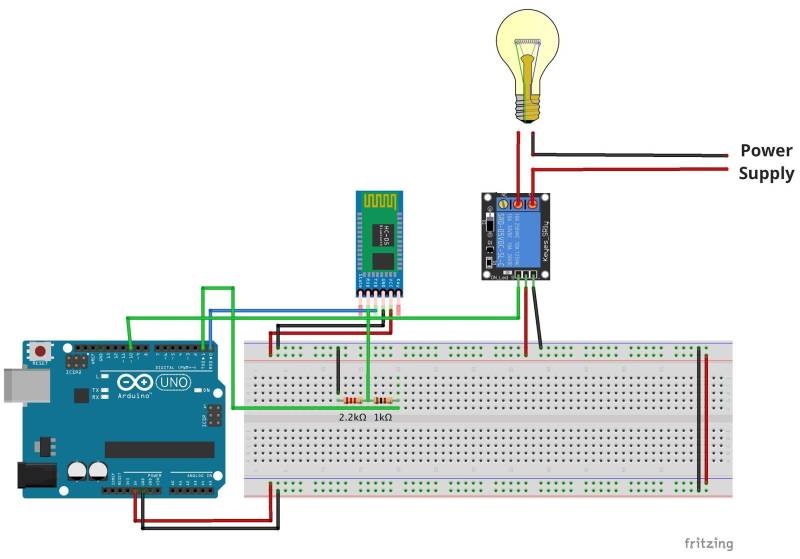 Article Technical Rating: 6 out of 10

From controlling the room lights with your smartphone to scheduling events to occur automatically, home automation has taken convenience to a whole new level. Instead of using mechanical switches, you can now conveniently control all the devices in your home from your fingertips.

However, that comfort comes with a rather expensive price tag.

For instance, a normal LED bulb costs $1-$2.  The Philips Hue smart home kit is available for $130 with each bulb costing $30.  Wemo Smart plugs that allow any electrical device to be controlled from your smartphone start at $30.

Unless you’re willing to spend hundreds of dollars on smart home devices, you won’t be able to expand the scope of home automation to control every device in your home.

This tutorial,demonstrates how to setup a simple DIY home automation using an Arduino, which will save you a lot of money. The whole setup takes less than 15 minutes to configure and will cost you less than $30. Moreover, the incremental cost of adding more electrical appliance comes down to only about $1.50 per device.

Here’s what you’ll need to get started:

Once you have all the required components, here’s how you need to wire things up: 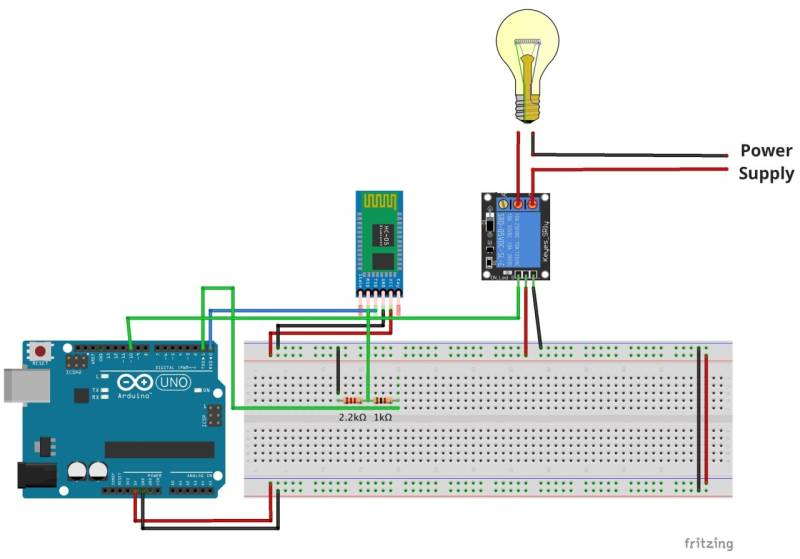 How to Connect the Bluetooth HC-05 to the Arduino

1) Connect the Arduino’s +5V and GND pins to the bus strips on the breadboard, as shown in the above circuit diagram.

2) Power the HC-05 module by connecting the 5V and GND pins to the bus strips on the breadboard.  The HC-05 is powered using 5VDC but includes an on-board voltage regulator that generates a 3.3V supply to power the transceiver.  This means the TXD/RXD pins operate at only 3.3V.

Although the Arduino is using 5V signal levels, and the HC-05 is using only 3.3V signal levels, no level shifting is required on this particular signal.  This is because the Arduino is based on an Atmel ATmega328 microcontroller which defines a logic high as any level above 3V.  So no level shifting is necessary when going from 3.3V to 5V.  However, that isn’t always true when going the other direction from 5V to 3,3V as we’ll discuss in the next step.

As shown in the circuit diagram, we’ve connected a 1k ohm and a 2.2k ohm resistor across the GND and TXD pins on the Arduino.  This is called a resistor divider because it divides down the input voltage.  We obtain the 3.3V level signal from the intersection of these two resistors.

This crude solution should never be used with a high-speed signal because the resistors form a low-pass RC filter with any parasitic capacitance on the connection.

We don’t use the STATE and EN pins on the HC-05 module, since they are not required for this setup.

Setting up the Relay Circuit 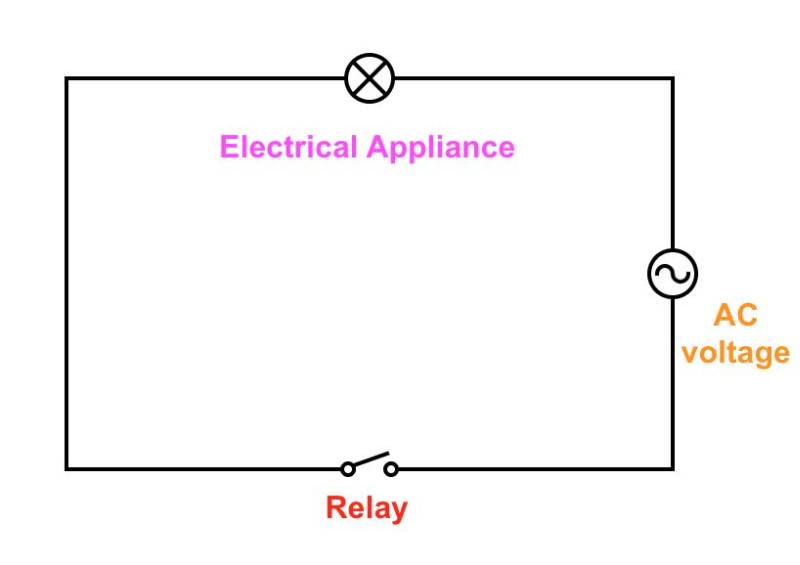 
For this application we’re using a relay module which includes the relay drive circuit allowing it to connect directly to a microcontroller GPIO pin.

CAUTION: The relay module we’re using can handle up to 10 amps of current at up to 240V AC.  That’s enough current for a lot of devices but not enough for high power appliances like a heater or dryer.  For high power appliances you’ll likely need about twice the current capacity (~ 20 amps).  You can either upgrade to a higher current relay, or place multiple relays in parallel.  Two 10 amp relays in parallel are equivalent to a single 20 amp relay since half of the current goes through each relay.

Here’s how to connect the relay module to the Arduino:

1) First, connect the 5V and GND pins of the relay module to the bus terminals on the breadboard.

2) Next, connect the IN1 pin on the relay module with PIN 4 on the Arduino. If you have a multi-channel module (2, 4 or 8 channels), you can connect IN2, IN3 … In(n) with different digital pins on the Arduino, and repeat the steps below for configuring the other pins.

Here’s how the relay module works: 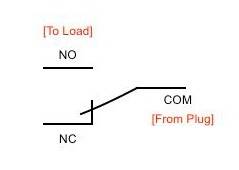 We want to turn on the bulb only when we send a signal from smartphone. That’s the reason we connect the load to the NO (Normally Open) terminal, so that when the relay is triggered from the Arduino, the contact switches from the NC terminal to the NO terminal, thereby completing the circuit.

The code is actually pretty simple. It initializes the relay first in the setup() method, and then waits for input on the serial port in the loop() method. If ‘1’ is received as input, it turns on the relay, and if ‘0’ is received, it turns off the relay.

Since the Arduino UNO uses its UART port for programming, it can’t communicate with the computer and receive data from the HC-05 Bluetooth module at the same time.  If you have attempted the above code on an UNO, you should get the error:

avrdude: stk500_getsync() attempt 1 of 10: not in sync: resp=0x00
An error occurred while uploading the sketch

Don’t worry though. Simply unplug the jumper wire connected to Pin 0 on the Arduino UNO (RXD pin), and re-attempt the code update. You should now be able to update the code successfully. After programming is complete then reconnect the jumper wire.

Controlling the bulb from your Android device

Now that we have setup the hardware and successfully uploaded the code, the next step is to control the setup from a smartphone. In order to that, you’ll need to download the Arduino Bluetooth Controller app on your Android device.

Here’s how to configure your Android device to send commands to the Arduino:

1) Open the app on your smartphone. It will ask for Bluetooth permissions. Click ‘Allow’. 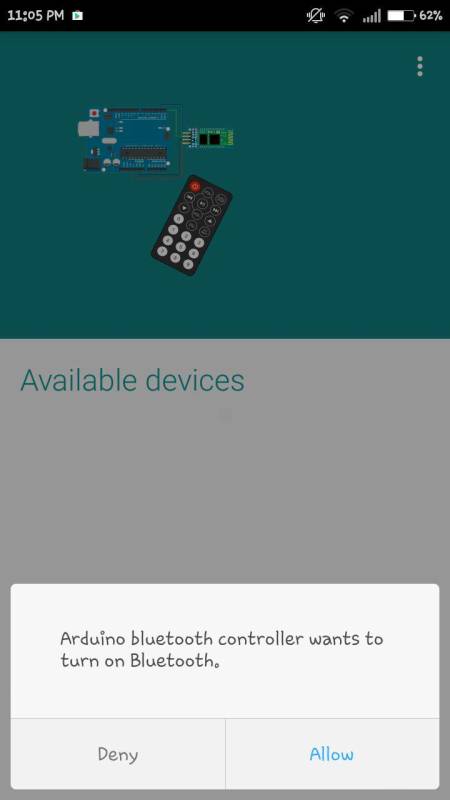 2) Next, it will list all the available devices in your vicinity. Select HC-05. 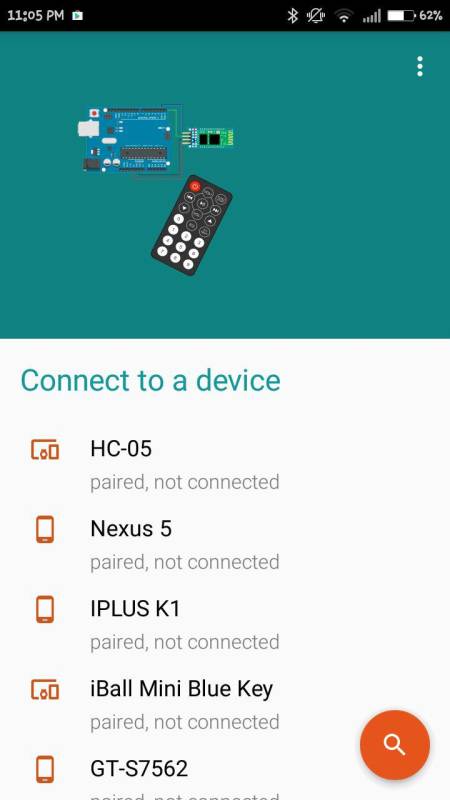 3) Once you select the device, you’ll be connected to the HC-05 transceiver. The app will now prompt you to enter the mode that you wish to use. Select ”Switch” mode. 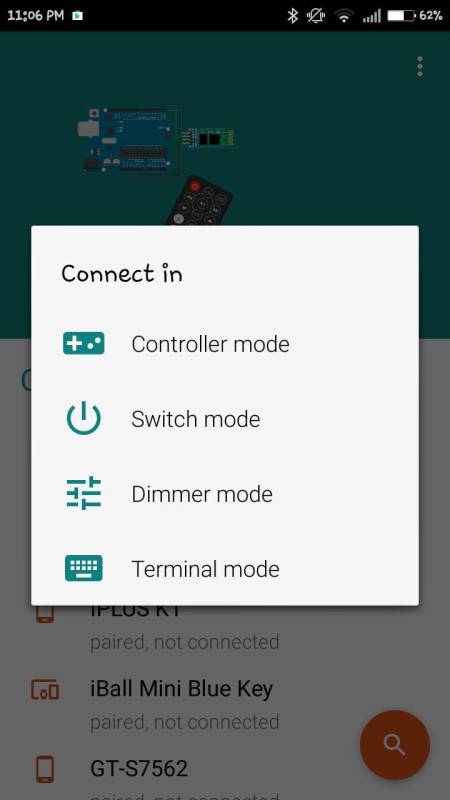 4) You should be redirected to the following screen. Click on the “Settings” icon in the top-right corner of the screen. 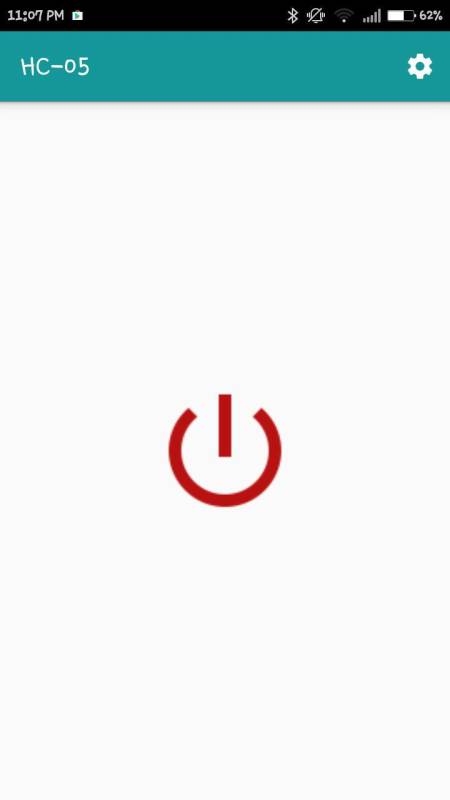 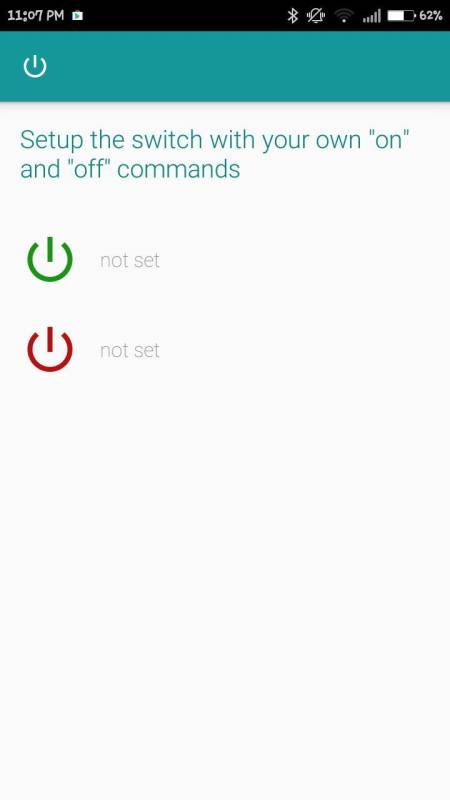 Here’s a short video showing the setup in action:

Using the above setup, you can turn any device into a smart device that can be controlled from your smartphone. While we used a single relay in this example, you can easily expand your system by using an 8-channel relay module.

Note: To keep things simple, we have used a Bluetooth app that allows you to control only a single load, but in case you wish to control more devices, you can use a use a more sophisticated Bluetooth control app or write your own custom Android app.

In this example, we laid the basic groundwork for controlling electrical loads using an Arduino controller and smartphone. However, what we have managed to achieve so far is just one tiny use-case of home automation.

Ideally, we should be able to do a lot more with home automation, like:

While the above cases are certainly more complicated than controlling an electrical device through a relay, our end-objective is to build an affordable and scalable DIY home automation system.  So stay tuned for future articles on home automation.

WARNING: High-voltage AC can be potentially very dangerous so be sure to follow appropriate safety precautions. Predictable Designs assumes no responsibility for any injury or damage that may occur by following this tutorial.

I think You should swap relay on and off #define values

Great post, I think people should learn a lot from this weblog it’s rattling user genial. So much great information on here.

here is a link for a small solid state relay package that is offered in 2,4, or 8 channels.
Low price, 5v control, opto Isolated, 2 amp output is fine for most lamps.

hi good day do i need to find the program of the bluetooth ? thank you