There are numerous applications where detecting the presence or absence of an object is required. This article explores the different methods of object detection, how they are implemented, and their major advantages and limitations.

Before getting in to the various methods used to detect objects, it is worthwhile to define exactly what is meant by “object detection”. On one level, this simply implies detecting the presence, or absence, of any object within a certain detection range.

However, there are other related areas that can also be broadly classified as such. For example, some applications require not just detecting an object, but determining the distance between the sensor and the object as well.

Others might require detecting only objects that are moving relative to their background. Finally, sometimes an object has not only to be detected, but identified, or, at least classified, as well.

Detecting an object involves using one or more of the object’s physical properties that are different from its surrounding environment, or different under some probing conditions. These requirements then dictate, to a large part, the kinds of detection methods that can be applied under a given set of conditions.

For example, using an interrupted light beam detection method is not feasible if the object is totally transparent at the light beam’s wavelength.

Here are the most commonly used properties that can be used for detection:

Optical properties include opacity to light of certain wavelengths and reflectivity. Optical beam interruption and beam reflection methods, as well as vision systems, fall into this category.

Acoustic properties, such as sound reflection and absorption, are mostly used for ultrasonic object detection and distance measurements.

Permeability and permittivity primarily include capacitive and inductive proximity sensors.

Another valid technique for detecting and identifying an object is to make it different by attaching tags and other distinguishing markings to it. For example, 1-D or 2D barcodes can be attached to objects for this purpose. Other methods include attaching reflective foils, or color-coded tapes.

Finally, the object can be detected by simply being more active than its surrounding environment. This could be producing some kind of sound, or emitting some type of RF energy in a defined band.

An object can be also be detected by simply moving. Or, it can be a warm-blooded human or animal whose temperature will be different from the surroundings. A typical example of using this property is the PIR (Pyroelectric InfraRed) motion sensor.

The next several sections describe in more detail some of the more commonly available sensors. Their basic operating principles, and their limitations and typical applications, will also be presented.

This category focuses on simple object detection techniques. They are mostly used to detect the presence or absence of an object without providing any other information about the detected object.

One of the simplest object detection methods is the beam interruption method. In this scheme, a light source, typically an invisible infrared beam, is used. An appropriate sensor is used to detect if the light beam has been interrupted.

This simple object detection can come in two variants as shown in figure 1 below: 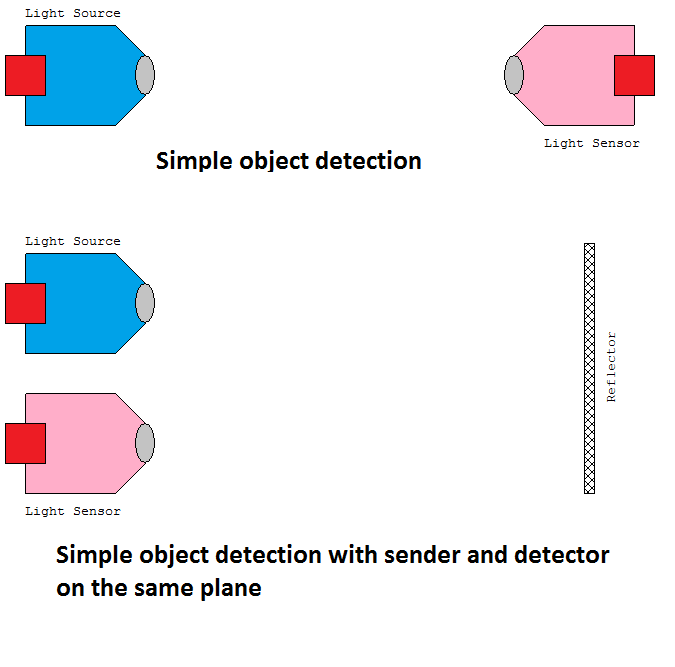 In one variant, a beam is emitted and the sensor is placed on the opposite side. Any object that is opaque to the beam will cause an interruption in the sensor reading.

Another option is placing both the sender and receiver on the same plane, with a reflector placed opposite to them. Again, any opaque object will cause an interruption in the sensor reading.

Typically, both the light source and sensor have lenses in front of them to focus the beam, and narrow the detection field.

Depending on how the sensor reading is processed, you can get a good estimate of the detected object’s size, depending on how long the beam was interrupted. These types of detectors are often used in store entrances to count traffic in and out of the store, or to detect moving objects on conveyor belts in industrial applications. In these cases, they can be used not only to detect object sizes, but also missing objects. Figure 2 shows an example of such a sensor. 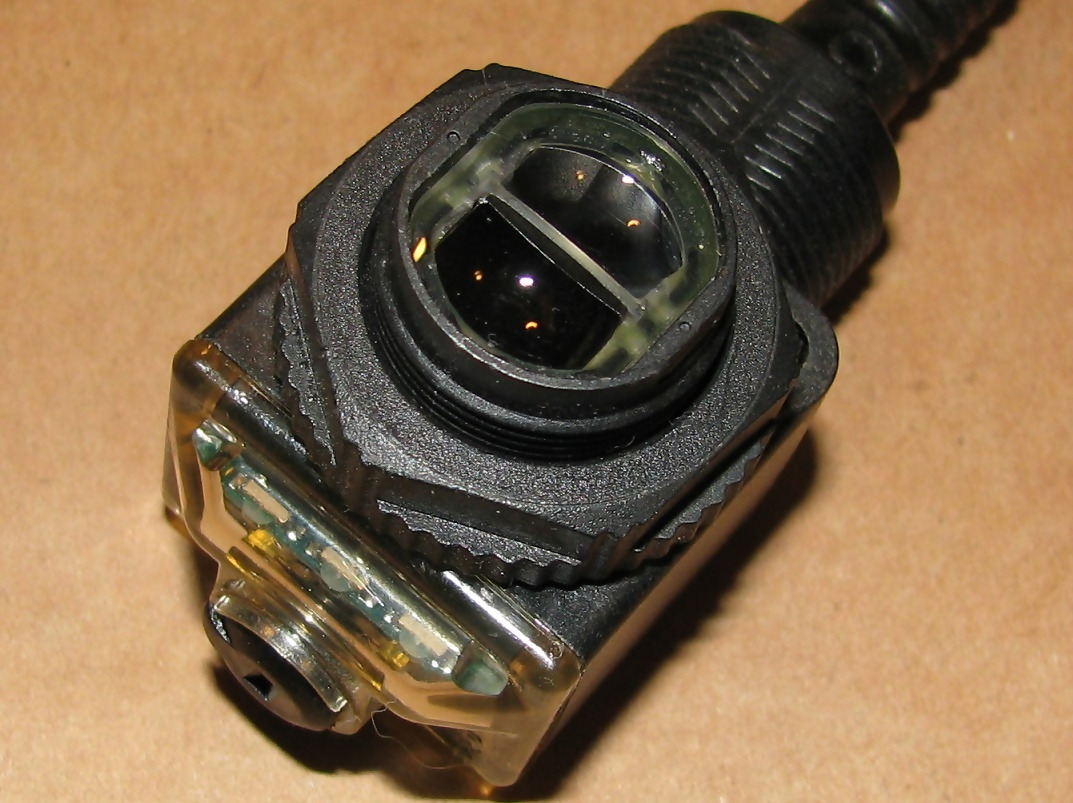 PIR (Pyroelectric InfraRed) sensing is a method primarily used to detect humans, or larger warm-blooded animals. It is typically used as a motion sensor. Anything warm radiates some infrared light, and there are many types of sensors that can detect this.

The PIR sensor is quite inexpensive and reliable. However, note that one of its limitations is that it does not work through glass or anything that will block infrared light. 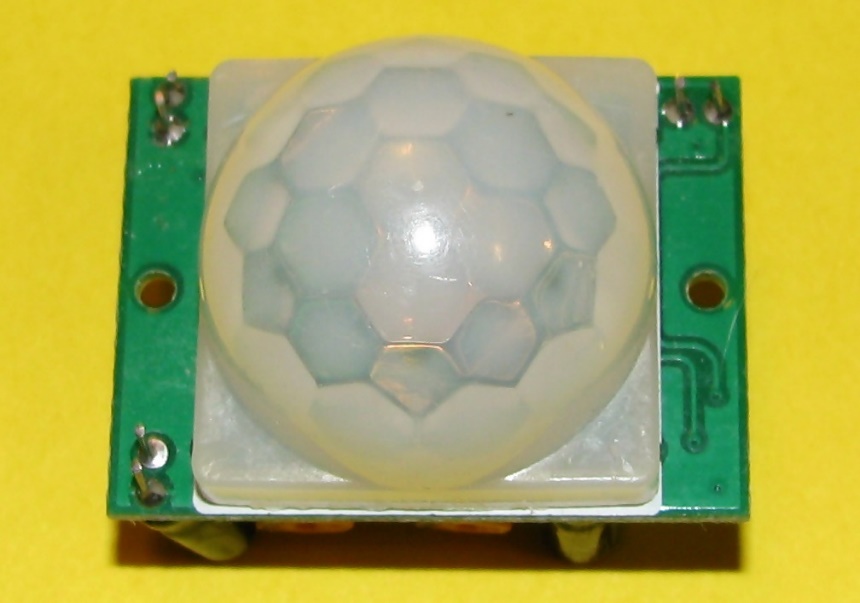 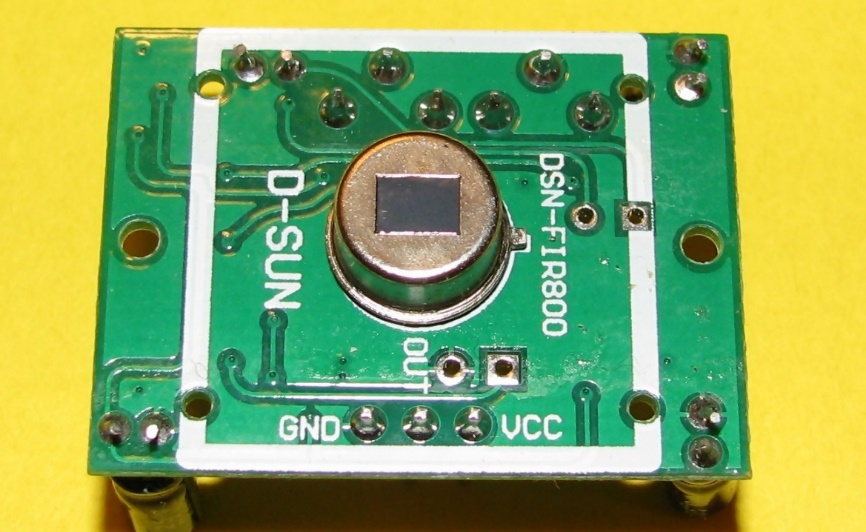 It is worth briefly mentioning the other motion sensing methods that are currently used – microwave sensing and general radio frequency (RF) background disturbance sensing.

The microwave detection method is essentially the same as a dumbed down radar detector. Here, a sender emits a microwave beam, and any motion within its detection range causes a Doppler shift in the received signal. This is then detected as motion.

Detection methods based on object properties

Metal detection and capacitive sensing methods fall into a category where specific properties of the material being detected are used.

In a metal detector, the search coil is actually part of an oscillator, and any material affecting the permeability of this coil will change its inductance, and hence the frequency of the oscillator.

Metal detectors will work through layers of non-metallic, intervening material such as dirt, glass, paper or fabric, if these do not significantly change the permeability of the space around the detector coil. Thus, they can detect, and locate, metallic objects in situations where they are invisible to the naked eye.

Capacitive sensors work by having the object change the permittivity of the space that surrounds sensing plates in the capacitor.

Capacitive sensors come in many variants, mostly having to do with the number of “capacitor” plates, and their placements.

They can be used to detect liquid levels inside a non-metallic container where the plates are just strips pasted on the outside of the container, and the liquid level is detected by the change in the dielectric constant between the plates.

Another application is as a capacitive touch and gesture sensor. Here, many plates are used, forming many capacitors, and the placement of the hand above these plates changes their capacitances. These can then be interpreted as gestures.

Time-of-Flight (ToF) sensors fall into this category. This type of sensor is used not only for detecting an object, but also to measure the distance between the object and the sensor.

Basically, these types of sensors ping the target, and record the time it takes for this ping to be echoed back. The term Time-of-Flight commonly refers to both laser and ultrasonic based solutions.

As the name implies, the probing beam in this sensor is a laser. Typically, this solution is just one chip with an aperture for an IR semiconductor laser, and another aperture for an array of photodiode receivers.

Various modulation techniques are used to measure the actual time it takes the light beam to travel between the sensor and the target.

Figure 5 shows a typical laser ToF sensor module based on the popular VL53L0X chip from STMicroelectronics. As can be seen, the apertures for the sender and receiver are very small, due to the fact that the probing beam is a laser, and thus has a coherent, narrow emission cone pattern.

Note that as with any light-emitting sensing technique, the sensor depends on the target being opaque, and there can be no intervening opaque medium between the sensor and the target.

Smoke, dust, or water vapor are examples of opaque materials that could impede this type of sensor. 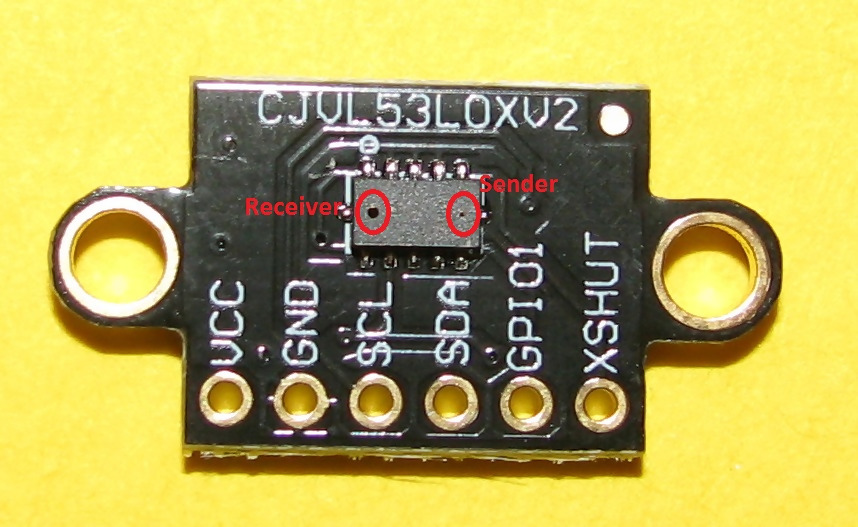 The other main ToF sensor technology uses ultrasonic soundwaves as the probing beam. It works in pretty much the same way as its laser counterpart. However, because the probing beam is ultrasound, it brings along advantages and disadvantages compared to lasers.

For one thing, ultrasound isn’t easily scattered by dust or smoke. It is also echoed back by glass or most transparent liquids, which are not suitable targets in the case of lasers.

Also, ultrasound isn’t affected by the color of the target, whereas very reflective or very dark targets do affect the achievable range of laser ToF sensors.

Ultrasonic ToF sensors do come with their own limitations though. The speed of sound is affected by temperature, and this has to be compensated for in order to get accurate ranging measurements.

Figure 6 shows a typical ultrasonic distance sensor that uses a separate piezo-electric based sender and receiver. These types of sensors are relatively inexpensive, and fairly accurate. However, they suffer from having a wide radiation cone, meaning that they will detect objects within a wide field in front of the sensor. 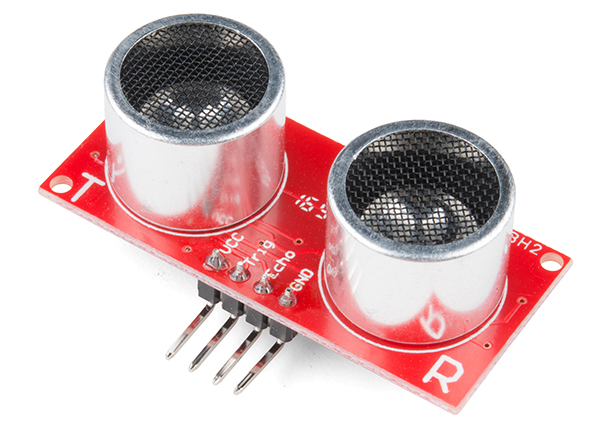 Another type of ultrasonic sensor relies on electrostatic transducers. Driving this transducer is quite complex, and requires high voltages. However, the pings can be very short, the radiation cone is quite narrow, precision is better, and the detection range is quite large

Figure 7 shows such a transducer from Senscomp who also provides supporting chips and compete modules. 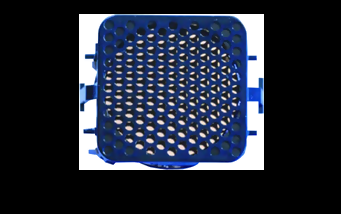 Finally, an object can be sensed simply by being recognized. This involves capturing an image of the object, and applying pattern recognition algorithms to identify it.

This opens up many possibilities that could simply not be achieved with other forms of detection methods. The downside is, of course, the complexity of such a system, both for hardware and software.

The hardware front end requires a camera that is sensitive to both visible and IR light. You can recognize an object under different lightning conditions, or in total darkness, by illuminating the area with IR light.

Also, since cameras can be focused, it’s possible to have a very wide, and variable, detection range. Since the camera has captured a full image, it becomes possible to distinguish among many types of objects, or even multiple objects within a single captured frame.

The major disadvantages of this method are the cost of the hardware, and the requirements of the software. On top of the camera, the system requires image capture hardware. Then, this image has to be processed, typically in real time.

This all requires high performance hardware and very expensive software, which increases your costs and development time.

In some applications, such as identifying objects going down a conveyor belt, you can compromise by simply sticking different bar-codes to each object type. This can drastically reduce your software development complexity.

Another disadvantage is that unless there is some visual reference, such as knowing the actual size of the object and the depth of field of the camera, it is quite hard to accurately gauge the distance between the object and the sensor.

So, some form of ToF sensing needs to be used to augment this detection scheme. This type of system represents the ultimate in object detection. It can detect, distinguish, classify, and range the object simultaneously.

As with all things in engineering, it’s best to start with the simplest solution and only increase the complexity if absolutely required.

For example, if your application can be served efficiently by using a simple technology such as an ultrasonic sensor, then don’t over-design your product using image recognition technology.

One of the many Einstein quotes I love is “Everything should be made as simple as possible, but no simpler”.