Teardown of a Smart Watch [Video]

In this teardown video of a Pebble 2 smart watch you will learn what it takes to design an electronic product with limited space available. 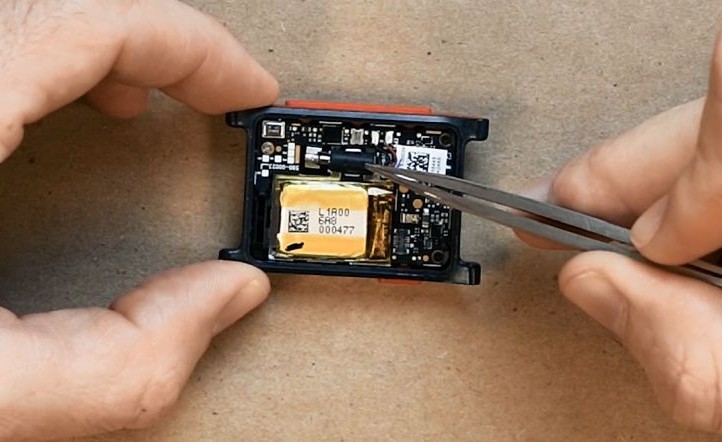 One of the best ways to learn about product development is to tear down existing products on the market similar to the one you are developing. Doing so can be a real eye-opener in regards to seeing everything that is involved in developing such a product.

Small wearable devices can be some of the most challenging to design due to the very limited space available. So in this teardown we’re going to look at what it takes to pack all of that technology into a small watch.

This teardown video was created by Craig Rettew who is a fantastic electronics designer and one of the experts always available to help you inside the Hardware Academy.

In this video, we’re going to do a teardown on a Pebble Watch 2.

On one end, there are two magnets and some pogo pins for power and ground, five volts and ground. The watch itself is really nice, and it’s waterproof down to five atmospheres, which is about 130 feet underwater.

It’s got cool little spring-loaded things to switch out the bands. The watch straps are made from some type of molded rubber. It feels very high quality, and is durable, waterproof, and sweat proof.

The charging cable attaches to pieces of metal, for the magnet to hold onto, and then there are two pads for the pogo pins for the power and ground for charging.

Now, it’s charging only. There’s no data coming across this USB cable.

It has a sensor for detecting heart rate. It picks up the users heart rate when you place it on your wrist.

On one side, there are some physical buttons, something I actually like in a smartwatch. These are covered by some kind of rubber to waterproof it.

There is a hole on the other side that I believe is the microphone. You can, for example, dictate a text message into the microphone and send it from the watch.

The screen is a memory LCD screen. It’s super low power. It displays the clock all the time and it won’t shut off, which is a nice feature of this watch.

Let’s bust this thing open. You can see, there aren’t any visible screws on the exterior, which is part of the waterproofing.

When you open it up, you’ll see a small flex cable connected to the mainboard. This cable is for the heart rate sensor. You also have a gasket for the back part of the waterproofing. You can pop this cable off and take a look inside.

It is a flex cable with a connector on the end. It’s sometimes called a rigid flex because part of it’s rigid and the rest of it’s flexible.

Your charging pins are pogo pins on the side. The pogo pin lays on pads on the mainboard.

The heart rate sensor is glued inside. I’m just going to break that glue hold and cut it. You can now take a look at the sensor.

This metal piece is probably a shield. They have the sensor on the flex cable as well. That’s the rigid flex side. The sensor-in package is here, with a couple capacitors on there. This talks to the mainboard.

This piece is one piece of plastic that was injection-molded. Looks like there is some kind of epoxy to hold these pogo pins in.

I’m actually not sure what these boxes are for here because the screws are on the mainboard. The mainboard is held in with three super tiny screws.

The battery is almost the same size as the entire PCB. It’s a real fine balance between battery size and battery life. This watch lasted seven days on one charge, which is pretty good for a smartwatch.

It has a label with a QR code. It’ll probably be unique to either the assembly or the PCB itself.

There is an eccentric motor that adds vibration. With these little motors, there’s a mass on the end of the little tiny motor that’s off-centered and gives you that vibration. The motor is just soldered onto the board, without any connectors.

If you take this board out, there are two different-sized screws, one’s longer than the other two.

The battery is held in place by some double-sided tape or glue. The motor is held nicely in place by a metal bracket. This design is obviously meant to be worn on your wrist. If you’re active, you don’t want this stuff flopping around in here.

There’s two other ribbon cables inside. Taking a look at the mainboard, there’s the battery, of course, and the eccentric motor, both soldered on directly. There aren’t any connectors. This saves space and lowers your cost, because you just have the labor cost of soldering them on.

On the main side is the processor, an Arm Cortex-M4. There is a memory chip, and pads for the charging cable. A small, spring-loaded contact is there for ground to touch the metal shield covering the screen. This is an ambient light sensor.

This chip has a lot of supporting electronics around it. There are passive components like the connector for the heart rate monitor.

One thing I want to note is that there aren’t any reference designators. It doesn’t have U numbers to indicate, for example, an IC or C for a capacitor, or an R for a resistor.

I believe they did that to save space, because when you have all those silk-screened letters and numbers on there, it actually can expand your board and make it bigger than you want.

It makes it a little more difficult for troubleshooting, but if you have a good test procedure for this, or a test jig, it’s not too important.

Early on during testing, it can be easier to diagnose issues when you know which part you’re looking at using a reference designator.

There is a Bluetooth system on a chip with an oscillator. I believe the antenna for this part is on the other side.

I don’t see a chip antenna, or anything else that indicates on the PCB itself that it’s an antenna. So, this strange-looking thing is probably the antenna.

I believe this is the microphone because it’s in the exact place where the hole was, in the front.

On the other side, you have all four tactile buttons of the user interface. These are connectors for the screens. This is called a zero insertion force connector. Basically, you slide your ribbon cable inside, it locks in place.

This one’s covered by some kind of padding. Over here is the accelerometer for this watch. It detects steps and activities, and things like that.

Then there is a proximity sensor and some interface electronics that look like they might be some test points. Again, there is another one of these spring-loaded contacts for ground. There are a lot of little tiny parts on a little board. They’ve got to fit it all inside this smartwatch package.

Moving on to the top half of the watch where the screen is, there is some kind of shield.

You have tap boxes to hold the screws, to hold the mainboard on. This is where the eccentric motor is, and where the battery is. You have a rubber piece for the tactile buttons for the user. Take this out to see the actual screen module.

It’s a single piece. The middle piece is just adhered to the back of it. This part is the ePaper or E-ink display. It’s got its own cable.

These types of displays are really cool, especially for low-power wearable products. It typically has only white or black pixels. When you display something, you can actually remove the power and it still displays your image. Basically, it pulls no power at all.

These are really great for displaying static images or when you need to refresh it at a low rate. The refresh rate on these things are not as quick as a high-end OLED TV or something like that at 60 Hertz or 120 Hertz, but these things will do the job displaying time, for example, which is what this watch does.

They call it E-ink or ePaper because it looks pretty close to what you can see on the printed page. It doesn’t reflect, so it’s easy to read in sunlight, which is another great feature for this watch.

There may be something over the top of the ePaper display, that looks transparent. It doesn’t seem to be easily removable.

But this describes the other half of the watch from a mechanical standpoint.

There’s another piece of plastic, the black part. These red parts have rubber overcoats for the tactile buttons. They look popped in a separate operation.

It’s a pretty simple construction, but a very smart watch. A lot of thought has gone into this design, especially to make it compact given everything it can do.

I’ve listed all the pieces of the watch: A charging cable, the top half of the watch with the screen inside, the ePaper screen with this metal piece to hold the eccentric motor and the mainboard down, the back piece which has the pogo pins for charging, and the place where the heart rate sensor goes, gasket for waterproofing, the actual heart rate sensor on a rigid flex cable which connects to the mainboard.

There are only three screws, and not a lot of adhesive is used. It’s a pretty simple design when it comes to assembly.

The mainboard has the battery, eccentric motor, and the mainboard with all the user-facing buttons on there. Of course, the watch band is made of some kind of molded rubber.