What’s Inside a Smartphone?

Modern smartphones are marvels of technology, and it is really impressive how much technology is crammed into such a compact device. Find out what it takes to build a functional smartphone. 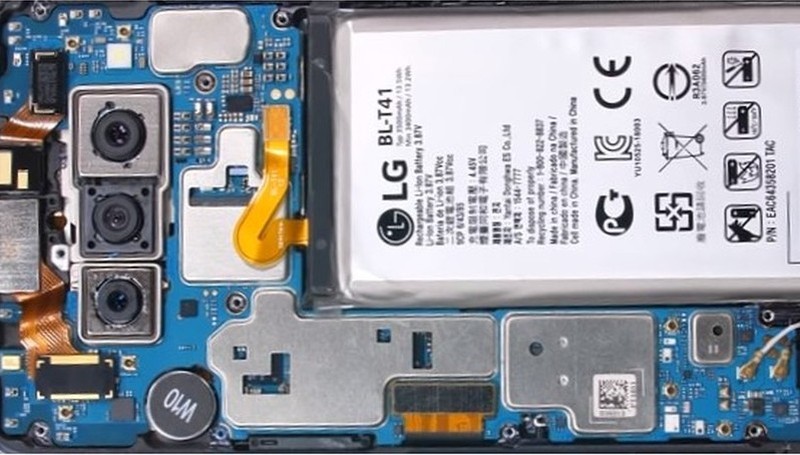 Any product that a customer holds in their hands is certainly the result of many compromises made to satisfy many conflicting requirements. Let’s look at the compromises that arise when developing a modern smartphone.

Let’s say a company’s marketing team wants a thin, lightweight product with a dazzling display, that will work on all cellular standards, has a very low BOM cost, and lasts a very long time on one charge.

The electrical team, meanwhile, has to engineer all the required functionality while using the least amount of energy to run everything.

On the other hand, the mechanical team has to find ways to fit all the electrical subsystems into the required space while providing an end-product that is sturdy enough to not bend or fly into pieces when causally dropped.

At the same time, the firmware team is working away at interfacing with the various electrical subsystems on the one hand, and the User Interface on the other hand.

Figure 1 shows a very high-level, functional block diagram of a typical smartphone. It consists of a few sub-systems that are found in all smartphones.

Of course, what each of these sub-systems consists of, varies among smartphones.

At the core is the processor sub-system that coordinates everything in the phone as well as runs the User Interface and applications. The RF sub-system contains the RF front-end, antennas and modem, and is the section responsible for all wireless functionalities.

The display sub-system is what the user initially notices about the smartphone since it is such a visibly large part of the entire device. The peripheral sub-system is what users would consider to be features of the phone. It includes such things as cameras, fingerprint scanner, audio, GPS, accelerometer and other similar components. 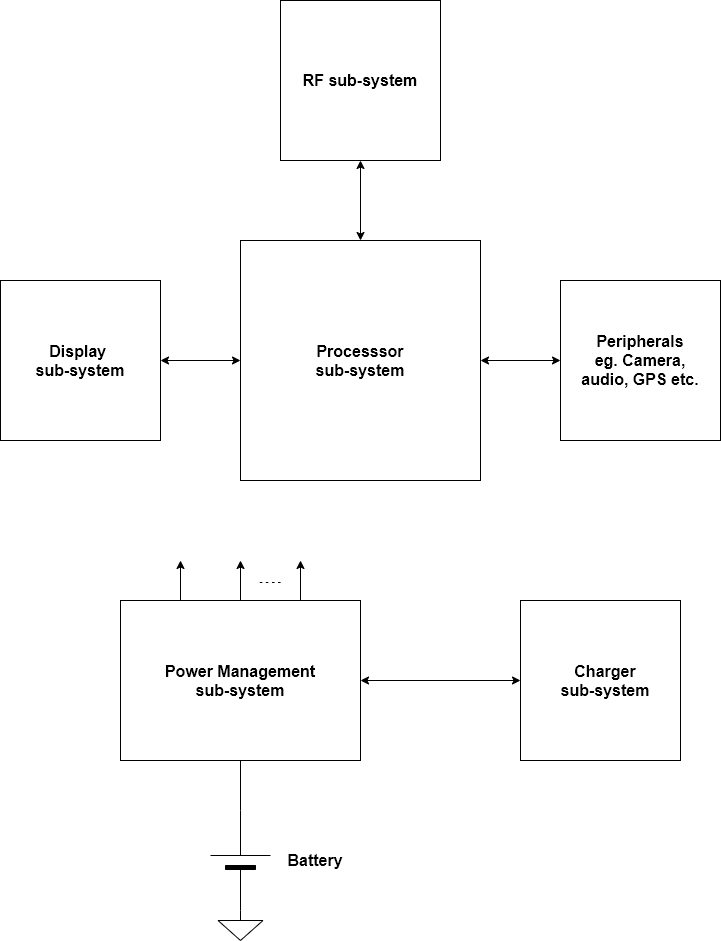 Finally, there is the battery and power management sub-system. It is, of course, responsible for storing and then providing power to the entire phone. Runtime is one of the key aspects a typical user considers when buying a smartphone.

In an actual smartphone, in order to cram all these sub-systems into the available space, many portions of these sub-systems are actually implemented on a single mainboard. This includes most everything except the actual display, the antennas, the peripherals, and the battery.

Figure 2 shows an example of such an arrangement for an LG G8 phone, where the mainboard is the blue board. 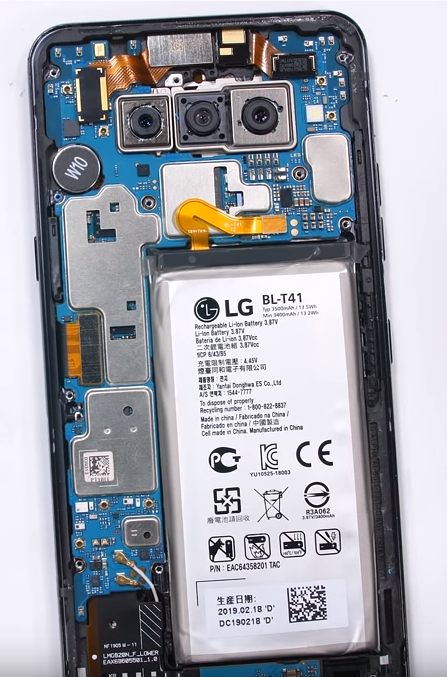 At the heart of the smartphone hardware is the system processor. In modern smartphones, this is mainly based on a System On a Chip, or SoC, that integrates more than just the processor.

This SoC is by far the most complex component in the entire smartphone since it encompasses as much as possible in order to save space. This SoC, and what it actually does, differs from one smartphone to another.

Here is a look at one of them: the Qualcomm Snapdragon 855. It is used in a variety of smartphones, including the Samsung Galaxy S10/S10+. Figure 3 shows the main sub-blocks of the Snapdragon 855. Table 1 briefly describes what these blocks do. 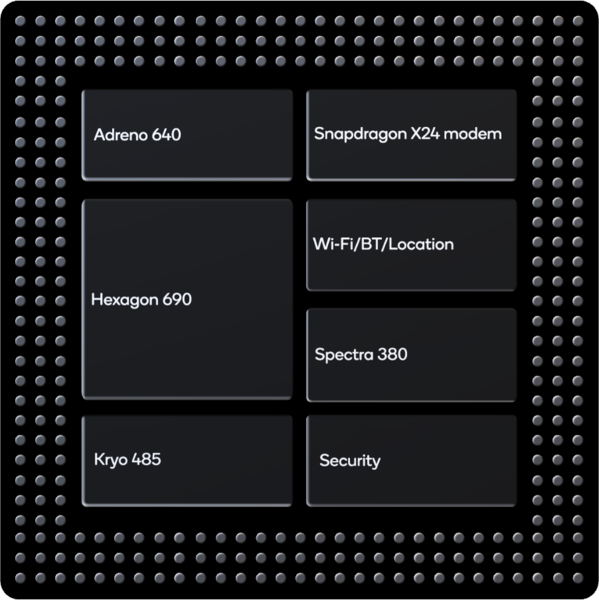 Additional components that are part of the processor sub-system consist of external memory, both volatile and flash. These, together with the processor SoC, are on the same motherboard, usually under a metal can that is used as an EMI (ElectroMagnetic Interference) shield.

A smartphone display is usually sourced as a complete sub-assembly that is then incorporated in the product. That’s mainly because these are complex products that require large investments to design and manufacture. So, only a very limited number of companies such as Samsung, LG Display and a few others make the kind of displays currently used in smartphones.

The type of display found in modern phones is the Active Matrix Organic LED, or AMOLED. Not to be confused with LCD’s with OLED backlights, AMOLED displays offer very high contrast ratios, high dynamic range, fast refresh rates and wide viewing angles, all in a very thin, and even flexible display.

In addition to the actual display element, the whole assembly also contains drivers and interface electronics such as MIPI. The touchscreen interface is also built-in. This, in turn, offloads the low-level task of actually displaying an image from the processor’s GPU (Graphical Processing Unit).

There are many different cellular communication standards, and smartphones have to support the latest standards. Additionally, a smartphone must be able to support previous generations of cellular standards.

This makes for a very large combination of modulation schemes. For example, even the latest smartphones still support the very early GSM/EDGE and CDMA standards. This is accomplished by a multi-standard modem that, in modern phones, is part of the processor SoC.

This is accomplished by having the modem implement the baseband communication protocol, and then upconverting this baseband modulated signal to one of the four worldwide cellular bands.

This step requires precise, low-drift oscillators like Temperature Controlled Crystal Oscillators, or TCXO’s. The fact that the phone can transmit and receive on multiple bands means that multiple antennas are needed. However, it isn’t practical to have one antenna for transmitting and one for receiving for each of these bands.

So, part of the RF sub-system consists of diplexers, duplexers and RF switches that allow the RF antenna to be tuned to the required band, and also be able to transmit and receive signals at the same time.

Finally, an important function of the RF sub-system is to have an accurate Receive Signal Strength Indicator, or RSSI. Not only are some modulation schemes dependent on the strength of the received signal, but the RSSI is also used to tailor the transmit power.

For instance, there is no point wasting battery power transmitting at full power if the user is very close to a cellular tower.

In modern phones, the RF sub-system components, except for the antennas, are also on the motherboard under their own EMI shielding cans.

The smartphone runs off battery power. This battery must power the entire smartphone. It also has to be charged, so a charging system has to be included in the device.

The many sub-systems in a smartphone require multiple supply voltages. Operating at the lowest voltage an active component can reliably operate at, saves power.

The battery voltage is not constant, and will drop depending on how discharged the battery is. All of this means that multiple voltage regulators are required to supply these various supply rails.

Most of these are switching regulators with high energy conversion efficiencies. However, some need to be linear regulators in cases where power supply ripples cannot be tolerated.

This is especially required in the receive sections of the RF sub-system where the received input signal level can be very low if the phone is far from the nearest cellular tower, or is indoors. All of these functions are provided by the power management sub-system.

All smartphones use li-ion batteries. These need special charging methods and they also need to be protected against electrical abuse, such as over-charging and short circuits.

These are also achieved by the power management sub-system. It manages the externally provided power, whether through a physical charging port such as USB or a wireless charging coil, and safely charges the battery.

Then, there is the battery itself. It is the largest component of the entire electrical sub-system, and is usually custom-designed to fit in the allocated volume of the device. Figure 4, for example, shows the L-shaped custom battery of the Apple iPhone 11. 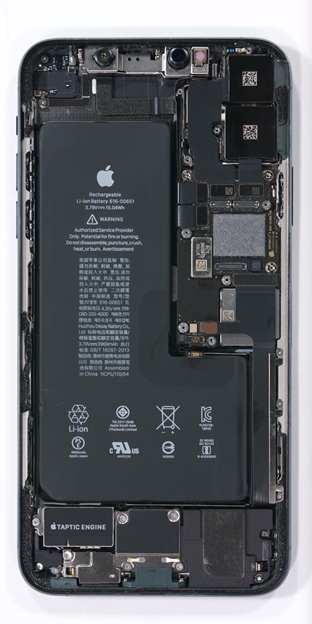 While some peripherals such as accelerometers are usually found on the mainboard itself, most are located off board. These external peripherals are typically sourced as independent modules that are all connected to the mainboard by flex PCBs with low-profile connectors.

They include front and back cameras, speakers, microphone, fingerprint scanner, haptic devices, and a variety of sockets and adapters for removable items such as SIM card, SD card and earphones.

Putting It All Together

Since most of the electrical functionality is actually built into a single mainboard, this calls for a very dense and highly complex PCB. Having components on both sides of the PCB is a given.

In some devices the mainboard is actually made up of two separate PCB’s that are stacked together, effectively providing four surfaces where components can be placed. Even then, the complexity of the routing is such that 10-layer or 12-layer PCB‘s, with blind and buried vias, are used.

The shape of the mainboard is dictated by the need for it to be routed around the battery cavity and the placement of some peripherals. For instance, the cameras are on the top part of the device, and these cannot be moved to any other area.

The speaker has to have a mechanical baffle that enhances the low-frequency range of the usually small speaker. Yet another aspect to consider is the need for heat management. This typically requires some form of heat spreader for the hotter components on the board.

Finally, as mentioned earlier, this mainboard has a lot of low-profile connectors that connect to the peripherals and the display. Figure 5, for example, shows these in the iPhone 11. These constraints make the design of the mainboard quite a complex endeavor. 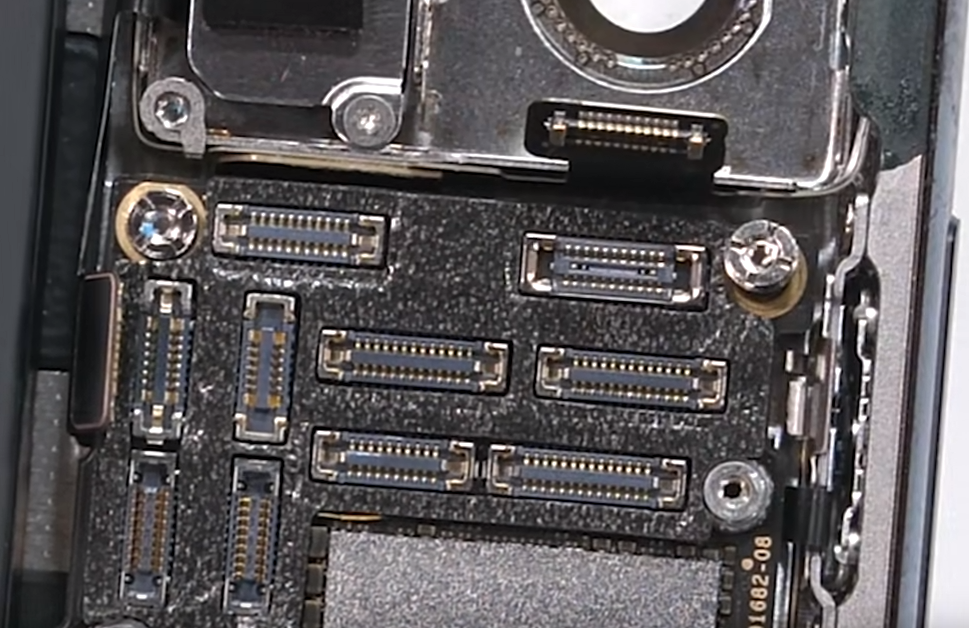 Figure 5 – Low-profile connectors to the mainboard in iPhone 11

To literally hold everything together, a smartphone needs a frame onto which all the sub-modules described so far are attached. This is invariably a metal frame, usually aluminum, that is either cast or milled from a single block of metal.

This backbone is what gives the device its rigidity, and ensures that the phone will not bend if it is sat on, or physically stressed.

Before the phone is released for sale, the manufacturer has to ensure that certain safety, performance and reliability standards are met. This section provides a brief overview of some of these.

The safety testing is primarily centered around two areas. The first is battery safety. The safety of the battery is something that cannot be fully specified at the component level alone.

There are safety standards that the battery must pass itself, but the overall safety also depends on external electronic as well as mechanical protection. The phone has to be electrically and mechanically stressed to ensure that it is safe.

The second safety aspect is Specific Absorption Rate, or SAR. Since the phone generates RF energy, and is sometimes placed near the user’s head, the SAR test is performed to ensure that the amount of energy absorbed by the user’s soft tissues during a phone call meets established standards.

In the worst cases, the antennas may have to be relocated, or the maximum RF power has to reduced.

As for performance, most testing is done on the individual sub-system prior to being specified for use in the design. These include items like the display and the camera.

However, some tests can only be done once the prototype unit is built-up. These include things such as antenna de-tuning and RF receive sensitivity.

Of course, the phone also has to meet emissions standards, such as FCC, before it can be made available for sale.

Finally, for reliability testing the prototype phone is subjected to vibration, drop and tumble tests, temperature shocks, humidity exposure, and electrostatic discharge tests to ensure continued operation under all these conditions.