Introduction to Battery Chargers (Part 1 of 2) 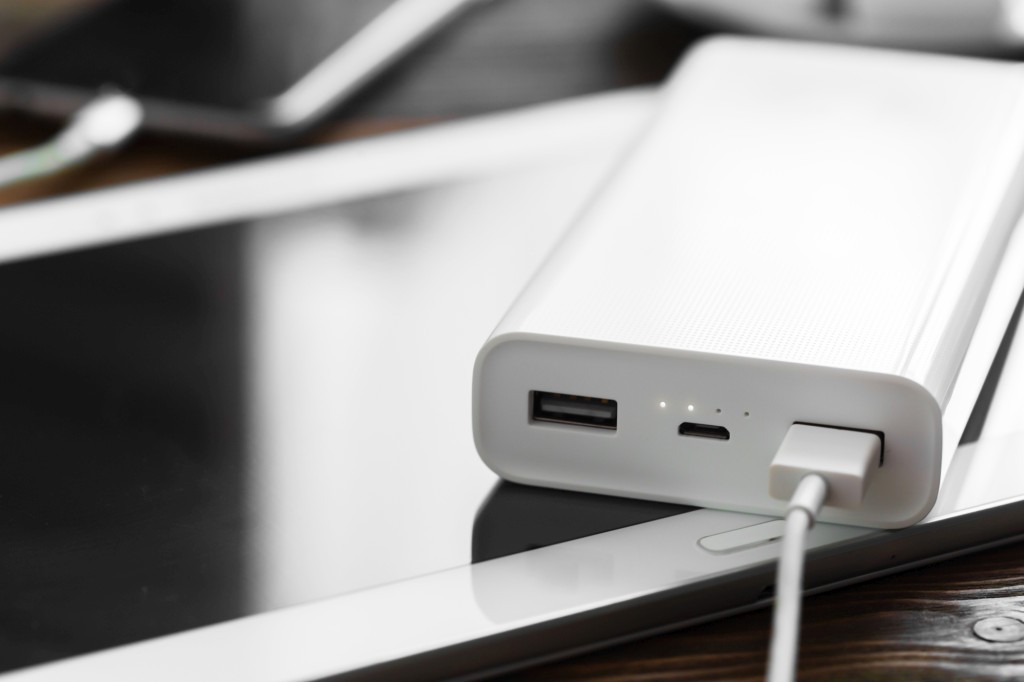 One of the most common types of electronic circuits used in modern portable electronic products are battery chargers, specifically those for recharging lithium-ion and lithium-polymer batteries.

Part 1 reviews the Microchip MCP73831, which is simple to use and a great first battery charger to review.

I’ll be going down memory lane a bit since the BQ24703 happens to be a battery charger that I designed many years ago when I was a designer for Texas Instruments.

The first battery charger we are going to review is the Microchip MCP73831. This battery charger is designed to charge a single cell and is made for either lithium-ion or lithium-polymer batteries.

Figure 1 – Schematic diagram for a typical application using the MCP73831.

A single cell lithium battery outputs about 3.6 V. So if you see a lithium battery with a rated output voltage of 7.2 V then that is made of two cells connected in series. Or if the battery voltage is 14.4 V then it’s a 4-cell battery pack.

In order to charge multi-cell battery packs you either must have an input supply voltage greater than the battery charging voltage or you need a switch-mode boost charger that can produce a charge voltage higher than the input supply.

The Three Stages of Charging a Lithium Battery

There are three stages of charging a lithium battery: the pre-charge stage, the fast-charge stage, and the charge termination stage. 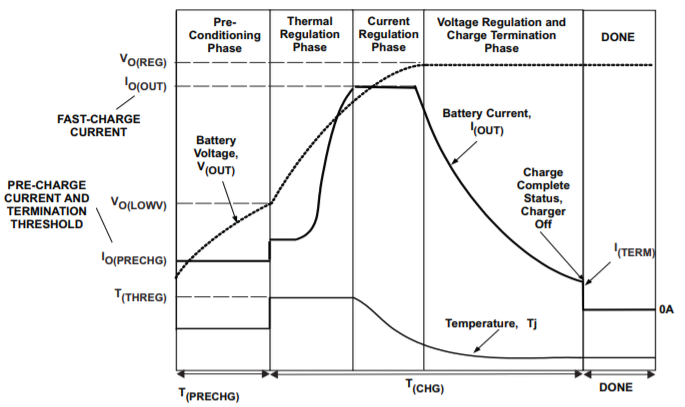 The first stage is the pre-charge stage, also known as the trickle stage. During this stage, the battery charger sends only a small amount of current (trickle charge) into the battery. If a battery is detected, the charger will then begin the charging process.

The trickle charge is a small percentage of the full charge current. The goal of this stage is to charge the battery up to a certain point so that it can be fast-charged in the subsequent phase (see below).

The charger automatically goes into the pre-charge stage when a battery is highly discharged and with a voltage below a certain threshold.

The pre-charge voltage threshold is a predefined percentage of the maximum charge current that you are responsible for programming.

Once the battery voltage exceeds the pre-charge voltage threshold, the battery charger enters the fast-charge stage.

The fast-charge stage, also known as the constant current stage, regulates the amount of current going into the battery.

Both the pre-charge and fast-charge currents are set by a single resistor on the PROG pin of the MCP73831.

The constant current is used to charge the battery, which is regulated based on the maximum charge current you have selected.

For the MCP73831, the maximum charge current is set by tying a resistor from the program pin to ground (see Figure 1). You can select a charge current from 15 mA all the way up to 500 mA.

Once the battery is close to being charged during this fast-charge stage, it then switches to the charge termination stage.

The final stage of charging is known as the charge termination stage or constant voltage stage. During this stage, the battery charger switches into a voltage-controlled mode, where it regulates the voltage going to the battery instead of the current.

Although the voltage to the battery is what is being regulated, the charger monitors the charging process by measuring the charge current.

Once the charge current while in voltage-controlled mode drops below a predefined percentage of the programmed current, the charger knows that the battery is fully charged, and the charging process is terminated.

You will notice on the graph in Figure 1 that there is also a fourth stage called thermal regulation. However, this stage only comes into play if the power dissipation is high enough that the charger’s internal temperature exceeds 125C.

If the system is designed so the charger never reaches this temperature then the thermal regulation stage is not entered. I discuss this in more detail under the power dissipation section below.

For example, if the resistor is a 2,000 ohm resistor, then the fast-charge current would be calculated as:

The exact fast-charge current setting will depend on the capacity of the battery and the maximum current that can be supplied by the external voltage source.

When charging a lithium battery, the maximum charge rate should be typically 1 C, which means that:

While it’s possible for some batteries to go this high, you generally want to stick to a 1 C rate unless the battery specifies that it can be charged at a higher charge rate.

For a linear charger the input current coming from the external supply is essentially equal to the fast-charge current setting.

However, for switching regulators the input supply current will be considerably different from the fast-charge current going to the battery.

It’s important to keep power dissipation in mind when working with battery chargers, especially linear ones like the MCP73831. Linear chargers are not very efficient under certain circumstances and it’s crucial that the charger does not overheat. Otherwise, the charging current will be automatically reduced below the desired level in order to keep the temperature from exceeding the maximum.

Power dissipation in a linear charger (or linear regulator) is determined based on the:

The maximum power dissipation and the likelihood of overheating typically occurs when transitioning from the pre-charge phase to the fast-charge phase.

At this point, the battery voltage is at its lowest point so the voltage difference across the charger is maximized, and the current is also at maximum when in fast-charge mode. This is the point at which the voltage differential and load current are both at their maximum.

For a 3.6 V lithium battery, the regulated charge voltage when in constant voltage mode is 4.2 V. 70% of that is roughly 3 V, therefore the battery will be at 3 V when transitioning from pre-charge to fast-charge.

Let’s assume we’re charging from a USB port, which supplies a voltage of 5 V. Therefore, there is 5 V on the input and 3 V on the output at the beginning of the fast-charge phase. That equates to a 2 V differential.

If the fast-charge current is set to 500mA, then the charger will dissipate 1 W of power at this transition.

You can consult the datasheet for the charger to determine the Theta-JA rating. This is typically listed under “thermal characteristics” or “temperature specifications”. Theta-JA will be reported in C/watt.

To determine how much your charger will heat up, use the equation:

For example, if you calculate the temperature gain to be 50 C, and the ambient air temperature is 40 C, then the component will be at 90 C.

Most electronic components are specified up to 125 C. Always avoid exceeding this temperature otherwise the charger will reduce the charge current as necessary to keep the temperature below 125C.

The MCP738 is available in two packages, including a leaded SOT-23 package and a leadless DFN package. The DFN has significantly better thermal characteristics than the SOT-23.

This will definitely trigger the thermal regulation stage which will reduce the charge current to ensure the charger temperature stays under 125C. The SOT-23 package should only be chosen for lower power applications.

DFN. The DFN package, on the other hand, has a Theta-JA of only 76 C. Therefore, for every 1 watt of power the product will only heat up by 76 C. Again, assuming you’re at room temperature, the product is going to heat up to 101 C. This is below the 125 C threshold and much better than the SOT-23.

So for applications with high power dissipation requirements the DFN package is the best choice.

In summary, the key criteria for selecting a linear charger to meet the required power requirements includes the package (which accounts for the Theta-JA specification), the power being dissipated, and the maximum ambient temperature that the product is going to operate in.

With switching chargers, overheating becomes less of an issue because they tend to be a lot more energy efficient and they don’t typically dissipate a lot of power.

As you may or may not know, lithium batteries can be very volatile. If you overcharge them or they get shorted, they can catch on fire or explode.

You’ve all likely heard of the Samsung Galaxy phones that kept catching on fire. Protection is very important to consider when working with these batteries for this reason. 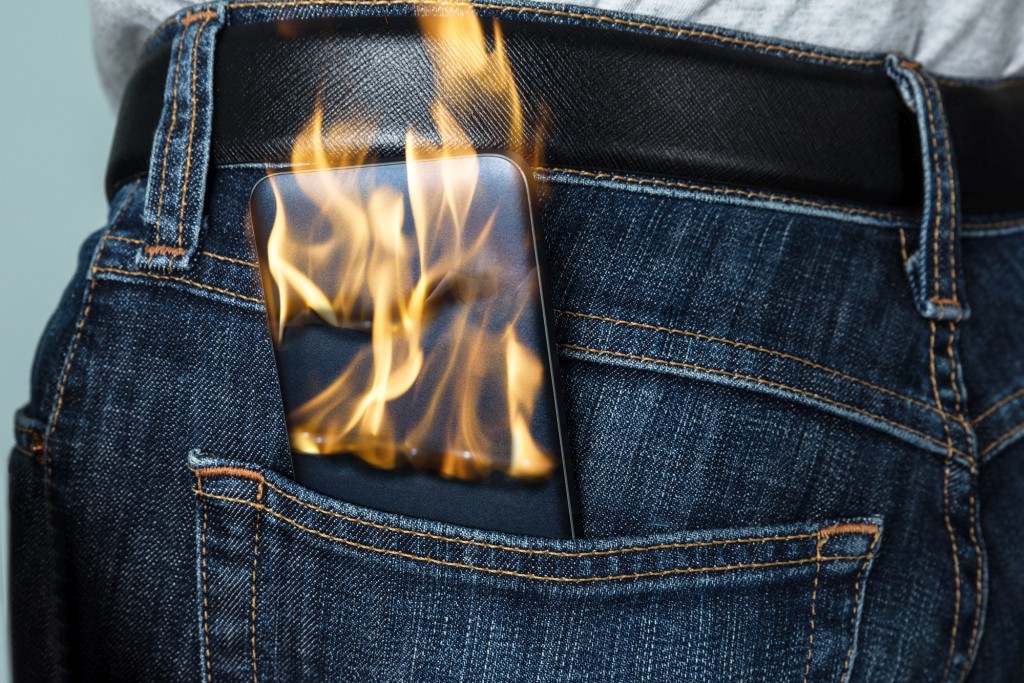 Figure 5 – Without proper protections a rechargeable lithium battery may catch fire or explode.

There are two options you can take when it comes to protection:

Option #1: Choose a battery with built-in protection. I almost always recommend that you go with a battery that has protection built in, at least initially.

If you look at a lithium-polymer battery, for instance, many of them will have a tiny circuit board under some tape (usually gold colored) that’s located at the top where the leads come out.

That circuit board is already built in and it’s what protects the battery. It prevents it from overcharging or being short circuited. 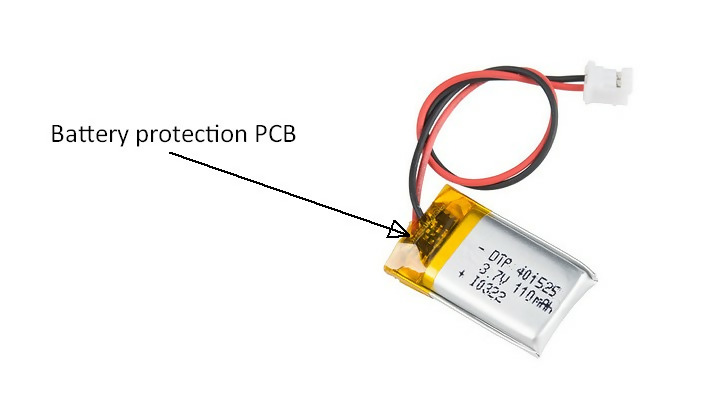 Figure 6 – I recommend that initially you stick with lithium batteries that have the necessary protection PCB already built-in.

If your circuit is not working correctly, you risk the battery exploding while you’re trying to get the circuit to work.

I almost always recommend sticking with batteries that have this protection built in. That way you simply don’t have to worry about it.

The MCP73831 is a simple battery charger. It is used to charge a single cell and designed for either lithium-ion or lithium-polymer batteries.

When selecting a linear charger, it’s important to pay close attention to the package type, power, and the maximum ambient temperature that the product is going to operate under.

Always be sure that there is battery protection to avoid overcharging or shorting the battery.

The BQ24092 is also a linear single-cell charger, but it offers more control over the pre-charge and fast-charge currents, and has various termination states that you can program independently. It also includes a temperature sense pin for monitoring the battery temperature.

The BQ24703 is a significantly more complex switching buck battery charger that can charge multiple cells. It also includes advanced features like a system power selector.

The key to success is knowledge of the obstacles that lie in your path and a realistic plan on how to overcome those obstacles. Helping you accomplish this is the goal of the Predictable Hardware Report.

Yes, absolutely you need protection for lithium ion batteries. Don’t even think of not having the necessary protection.

Another great article! The technical difficulty was pushing the level if my understanding but I do enjoy learning new things.
As always, best to you!
Emerson

Thank you Emerson! That is fantastic that you are pushing yourself to learn as much as possible. You have the right mentality.